Simple Tips To Start A Potato Farm Business For Beginners

Potatoes, like yams, are one of the staple foods, and when considered as an agricultural business, they also generate great profits. Although it may be easier for people already involved in agricultural related businesses to enter the potato growing industry, it may be different for beginners.

To start a successful potato planting business, you need to know the most suitable season and soil for planting, management skills, varieties, and a comprehensive potato planting business plan. The following tips will guide anyone who is eager to get into potato farming and understand the basic steps required to make big profits.

When starting this type of farming, you should know that there is a soil that is considered the ” best soil” soil with good drainage for effective potato planting. Although potatoes can be grown on a variety of soils, as long as the soil is suitable, the yield will be high. It is a wise decision to ask other local farmers to find out what type of potato you are looking for and the best soil for the potato varieties of your area. 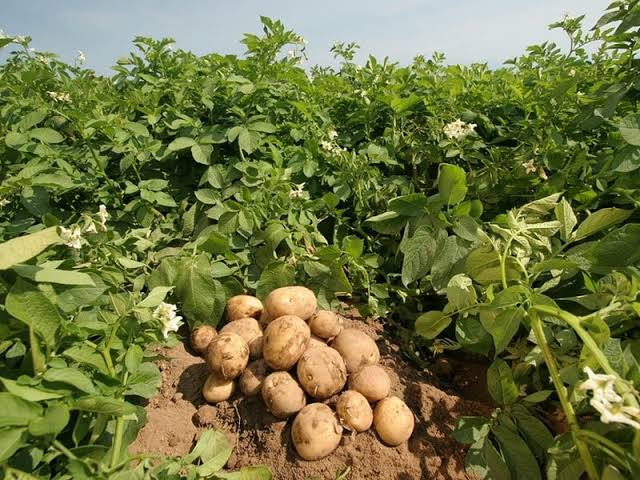 Soil type and temperature will also help you choose the most suitable farmland for your cultivation. The temperature of the soil must be considered because the potatoes will not start to grow until the soil temperature reaches 45 °F. If you are planning to start a potato growing business, you should always keep in mind that good potato production depends on good selection of the land. Always go to the land with the best soil to get a good yield.

The land you choose for growing potatoes should have a very good soil structure. Avoid using soil with saline- alkaline soil. The type of soil that is considered most suitable for growing potatoes is soft soil, such as sandy loam soil, which allows water to penetrate the soil, drainage and gas to enter and exit the soil. These types of soils are rich in organic matter and can drain. They are humid but not flooded.

Although potatoes can grow well at any time, they must be planted in the correct season to make them more productive and help prevent or reduce diseases that affect potato crops. Potatoes grow well in the rainy season, but if you have an adequate irrigation system, this does not mean that they still can not grow in other seasons. 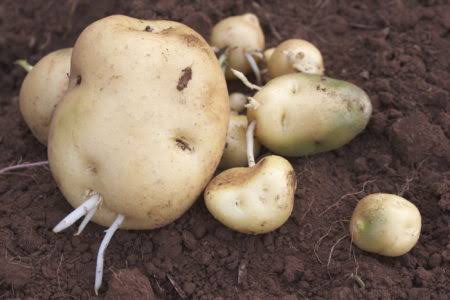 The Irrigation System can be used to grow potatoes in dry or dry seasons. But it is best to plant it in the rainy season between the end of March and June. Before planting time, make sure you have cleared the land and prepared it for the planting season. Also, make sure you buy the right potato stems for the type of potato you want to grow. One of the main processes of potato planting is cleaning. This means that you must first clear the area or piece of land where you plan to grow potatoes.

Get the correct potato seed variety

There are more than 200 types of potatoes varieties in the world, and each of them has a specific type of potato that can be added. The most popular types of potatoes appear to be sweet white and Irish yellow. Other types include red, purple or blue, auburn, small, and fry. The development process first shoots and then turns into stems and leaves in a month.

An interesting thing about the potato is that you can easily grow it using the seed or you can get the stem from the seed yourself. Choose the right seed for the specific potato variety you want to grow. 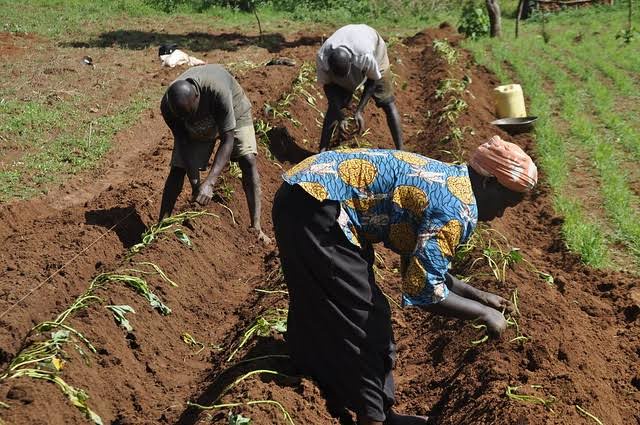 Just sown in the planting season in early March to prepare potato stems for your cultivation. Even on a piece of land, just five potato seeds can get enough stems to start your potato crop. Some factors to consider when planting any type or variety of potato are planting depth, planting rate, spacing, fertilization and pest control.

Every potato grower should be vigilant, because potatoes are susceptible to pests and other fungal diseases, which can reduce yields. Purchase suitable fertilizers and other necessary insect and weed control chemicals, such as pesticides and herbicides.

Potato fields can use any type of fertilizer. Natural compost can be used as homemade or artificial compost. But if the land is depleted or fertile, no type of compost is needed. 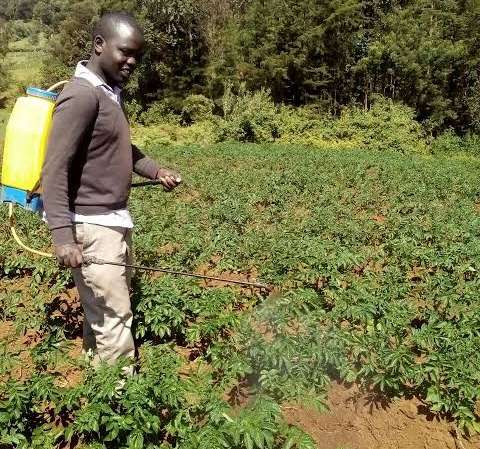 Common Pest And Diseases And How To Handle It

There are many pests and diseases that affect potato tubers, so when you inspect potato crops every year, take time to check for symptoms of the disease. Correct identification will help you decide which tubers can be stored well and which should be sold as table material, and will give you a better understanding of which soil- borne diseases exist in your field, thereby improving your future crop rotations.

Early blight: It usually affects the leaves of potatoes, but tuber infection may also occur. Nodular lesions are black, depressed, and round, often bordered by purple to gray raised tissue. The pulp below is dry, leathery and brown. During storage, diseased spots will enlarge and tubers will wilt. 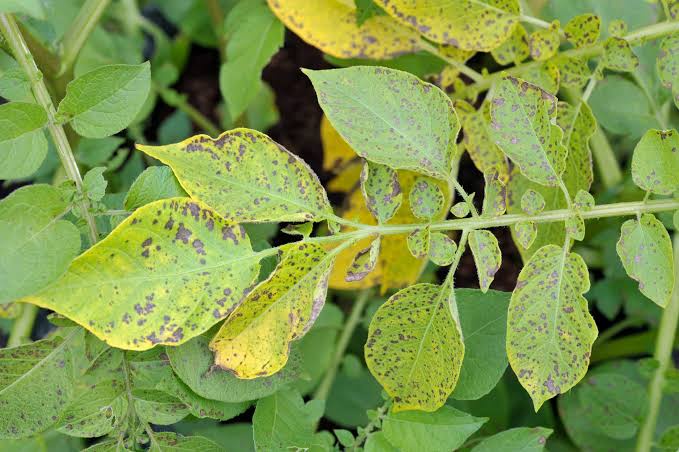 Fusarium dry rot: It causes light to dark brown or black dry rot on the inside of potato tubers. Rot can occur in injured areas, such as bruises or cuts. The pathogen penetrates the tuber and often rots from the center. Extensive decomposition can cause the tissue to shrink and collapse, generally leaving a black depression on the outside of the tuber and the internal cavity.

Black spots: On potato leaves, the symptoms of black spots are almost indistinguishable from the symptoms of early blight. In tubers, it produces tiny black sclerotia (the resting structure of the fungus). Tuber symptoms can easily be mistaken for psoriasis. 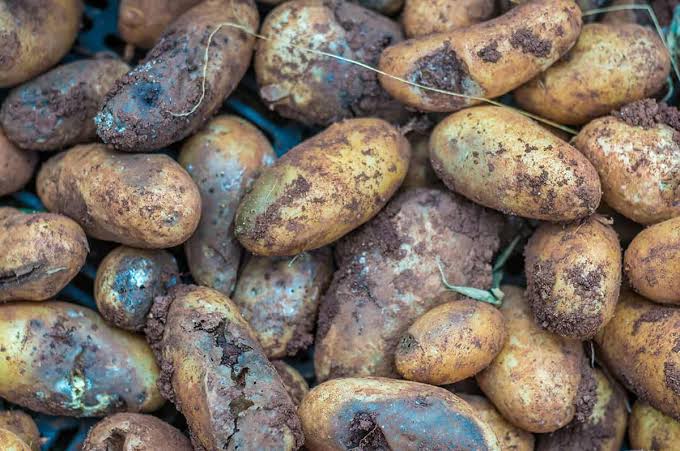 Psoriasis: Psoriasis only affects the skin of the potatoes. Lesions begin at the end of the stolon and appear as small light brown spots, which may be difficult to find at harvest, but will continue to develop during storage. During storage, the lesions may darken, the skin may fall off, and many small round lesions may coalesce to form a large affected area. Due to excessive water loss during storage, tubers can also dry out and wrinkle. 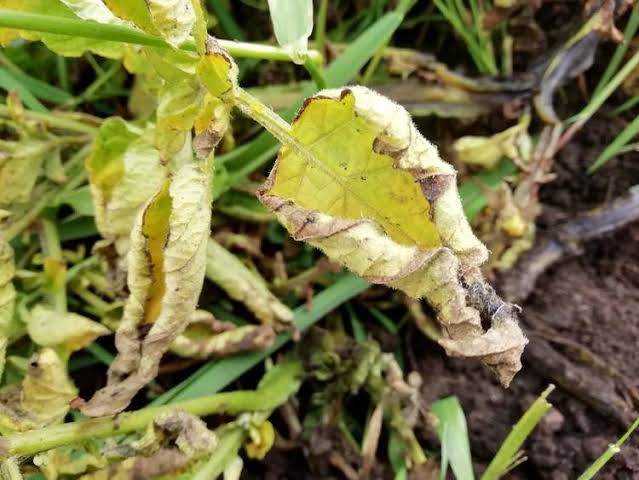 How to Identify Pests

Colorado Potato Beetle: The adult stage of this pest has 10 alternating orange and black lines running horizontally along its back. It lays clusters of bright orange eggs. Once hatched, the immature eggs go through four immature (larval) stages and then pupate in the soil. Then an adult reappears within a week to 10 days to start a new generation. Both larvae and adults are generally deciduous. They chew on plant leaves, although early larvae will not cause as much damage as late larvae, if not controlled effectively, late larvae will quickly shed the crown of the potato. 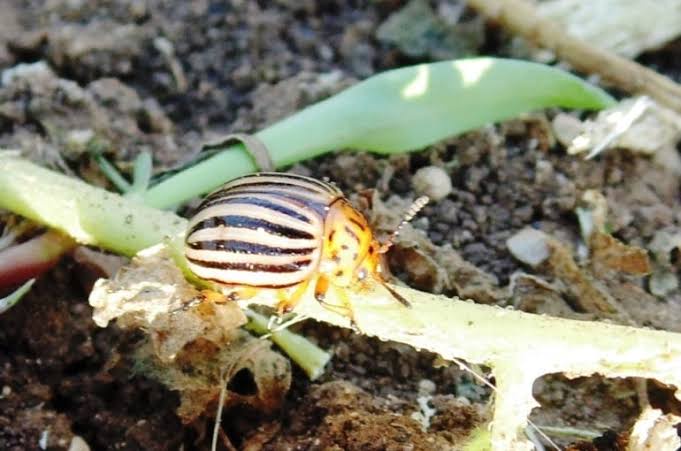 Potato Leaf hopper: This is a migratory pest that flies from southern latitudes in adult form and is carried by the wind during major climatic events. Once they reach the potato production area, depending on the climatic conditions, they can reproduce from three to five generations a year. The potato leaf hopper has a mouthpiece that is used to pierce the vascular tissue of plants, feed on plant sap, and absorb nutrients.

Nematodes: Nematodes are the larval stage of click beetles, slender, yellowish- brown, about 3/4 inch long in late development. This pest attacks sprouting seeds, roots and tubers. Due to digging during feeding, damage is usually seen as shallow to deep holes in the potato. 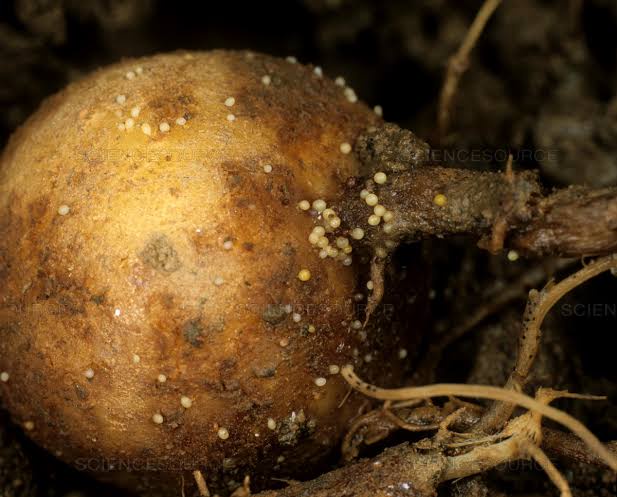 How To Properly Harvest potatoes

Potatoes need three months to mature before they can be harvested. Two to three weeks after the leaves die, they are mature and ready to be harvested. The harvest month is usually around August or September, depending on the sowing time. The good news for growing potatoes is that yield is not established once and for all. After the first harvest, the remaining roots in the soil begin to increase in yield, usually around December mainly for sweet potatoes. 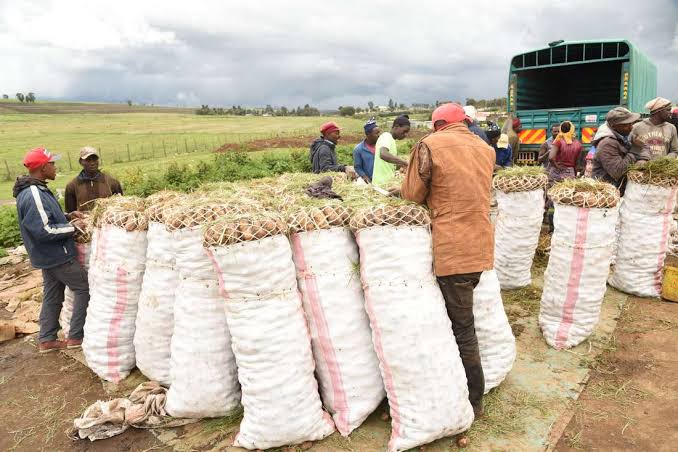 However, the potato, as one of the main agricultural foods for export, has many agricultural benefits, the clearest of which is that it can be used as an important source of employment on a suitable scale.

What you need to know before investing in digital gold