The number of individuals with Bitcoin (BTC) assets of 0.1 coins or more has broken into new all-time highs.

Data obtained by a popular crypto data aggregator, Glassnode recently shows the number of Bitcoin wallets holding 0.1 BTC or more reaching a new record high of 3,054,282 — beating out May 21’s previous record by about 212 addresses. 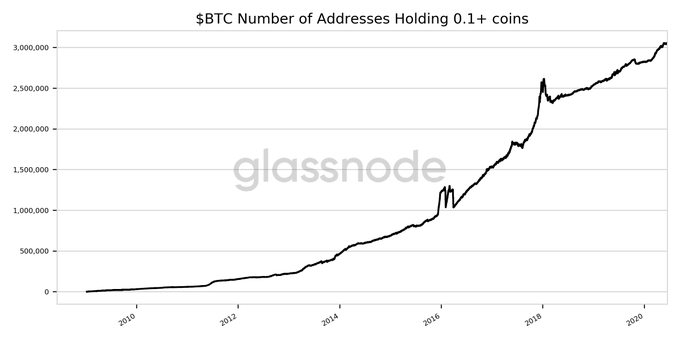 What you need to know; The smallest amount of Bitcoin is known as Satoshi, which is 0.00000001 Bitcoins. But since this number is so little, you can’t actually buy 1 Satoshi on any crypto exchange. On Coinbase, for example, the minimum amount you can purchase starts from 2 dollars.

The number of BTC wallets holding 0.1 BTC or greater has been increasing since the plunge of 2017 bull run after reaching its peak.

“Though the [bitcoin] bubble collapsed as dramatically as it inflated, bitcoin has rarely traded below the cost of production, including the very disorderly conditions that prevailed in March,” said JPMorgan experts in a report led by head of U.S. interest rate derivatives strategy Joshua Younger and cross asset research analyst Nikolaos Panigirtzoglou.

How To Make Money Online With with brave browser